One of the most difficult problems for restorers and technologists is non-destructive studies of multilayer coatings. Traditional methods, such as x-ray radiography, infrared reflectography, give an integrated picture of all layers and it is almost impossible to determine the sequence of layers and highlight the layer of interest. For this purpose, the terahertz time-domain spectroscopy (THz-TDS-based) object visualization system can be useful. Due to non-invasive properties of THz radiation, such a system allows to be applied for investigation of an object of art.

The main goal of this study was to test the detecting capacity of such a system to identify layers of paint below the surface. We have used a unique test object, mimicking the most common tasks for painting investigation.

Specially to test our THz equipment the restorers of the State Russian Museum have designed a complex test object which mimicking real tasks that museum experts must solve. As a basis, a piece of old canvas was taken, covered with light background and a painting layer dating from the 19th century. On the back of the canvas, a red-brown background was applied, and on top of this layer was painted a man’s head. On the other side the sample famous restorers of the oil painting of the State Russian Museum wrote their signatures in various colors.

When the signatures were dry, they were covered with a thick layer of brown paint so that the relief of the letters was not visible. One of the signatures, which was painted in brown paint, was coated with green pigment. The size of canvas approximately 21×22 cm2 with features on the front (portrait) and rear (painted stripes). The image of paints on canvas was recorded using the TeraPulse LX (TeraView, UK) system with a spectral range 0.06 THz – 6.00 THz and Nikon D70 camera with an IKS-1 infrared filter (IR range 700-1100 nm).

Due to the high sensitivity of THz radiation to the distinction between the optical properties of painting materials, this experiment allowed us to obtain detailed information about the structure of layers of test object and determine the shape of invisible elements without damaging the canvas. Thus, the THz imaging method can be very useful in restoration work designing, determining defects in the structure of paintings materials, as well as when searching for hidden objects under layers of paint. 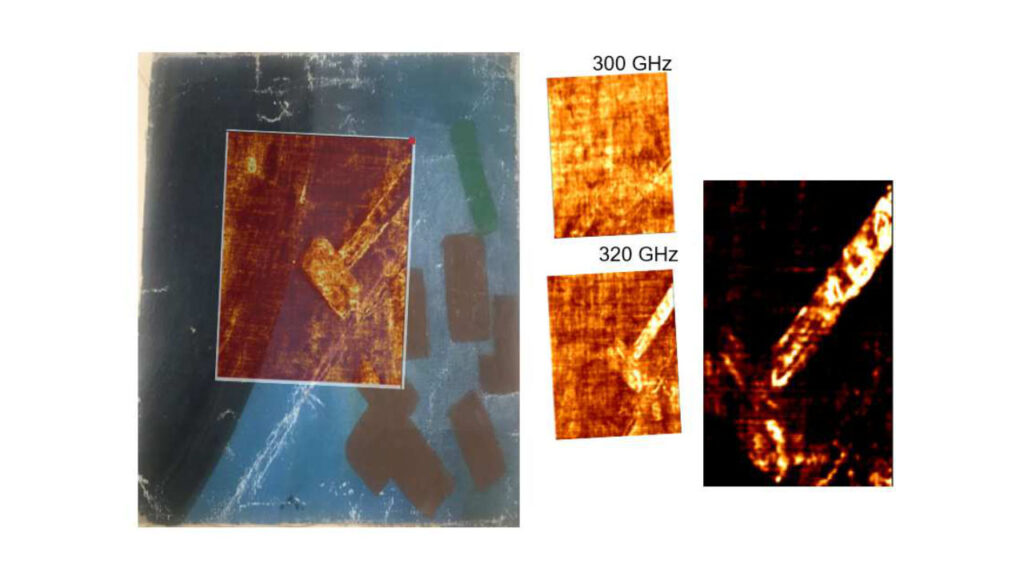 Imaging through painting on the canvas: back layer to reveal the signature

This work is supported by the Government of the Russian Federation (proposal #2020-220-08-5053 to support scientific research projects implemented under the supervision of leading scientists at Russian institutions); and by RFBR and CNRS according to the research project No18-51-16002.