The wide range of imaging and spectroscopic capabilities offered by TeraView’s terahertz technology make it ideally suited for non-destructive evaluation, this enables inspection of layers in various materials that are challenging for other characterisation methods.

Have a question? Ask an Expert >

TeraCota is a non-contact, multi-layer coating thickness sensor that uses pulsed terahertz light. The operating principles of this sensor are similar to those of pulsed ultrasound, without the need for coupling fluid.

This sensor uses a broadband pulse of terahertz light to illuminate the coated surface from a short distance. The reflected signal contains reflections at the interface of adjacent coating layers, and it is analysed to determine the thickness of each layer.

The automotive paint process is the initial application area to determine the thickness of individual paint layers following baking. For this application, a successful operation has been demonstrated on all types of basecoats encountered: solid, metallic, and pearlescent.

For qualification, the results are compared with the values obtained from standard thickness sensing modalities (optical microscopy, magnetic gauge, and pulse ultrasound). This article also presents the results of initial field trials carried out in a production environment with a demonstrator system, which is the precursor to handheld and robot-mounted production-ready systems.

Many materials are semi-transparent to terahertz radiation. When stratified materials, such as a coated substrate, are illuminated by a broadband terahertz pulse, a reflected signal is obtained. This reflected signal contains partial reflections from each of the interfaces in the sample, encoding information on the properties of each layer. 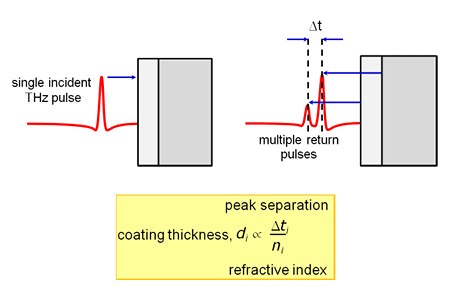 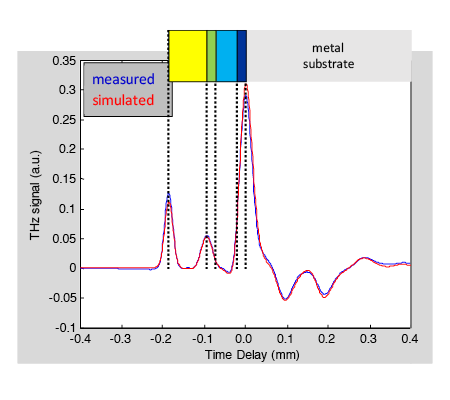 In order to test the performance on panels with film outside of the thickness specifications a set of painted test panels were prepared. Two of the paint layers - primer and E-coat - were coated at nominally uniform thickness. Basecoat and clearcoat were coated at three thicknesses: target and below and above target thickness.

Industry standard techniques, such as magnetic inductance gauge and optical microscopy, were used to perform independent measurements of individual and total dry film thickness for comparison with terahertz readings. 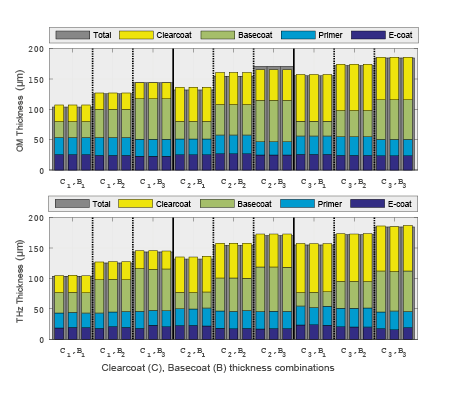 In ideal operation, the sensor is positioned at the designed distance from the coated surface in such a manner that the terahertz probe beam is normal to the coated surface. Experimental investigations have revealed that reliable operation is maintained within deviations from desired sensor orientation that can be readily achieved through both manual and robotically controlled positioning.

Temperature dependence of ultrasonic calibrations limits ultrasonic thickness gauges to operating at room temperature. The terahertz sensor shows no such dependence, providing reliable operation over a range of elevated temperatures: 30 °C to 150 °C (similar to that achieved during present automotive paint curing). 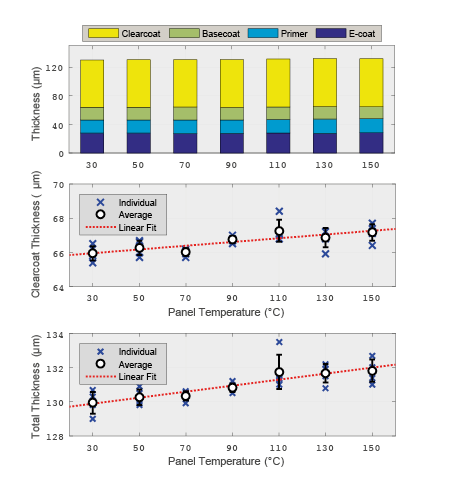 The preparation of painted test panels involved the application of the basecoat at a linearly increasing thickness, with the remaining three layers being coated at a nominally constant thickness.

A pseudo line-scan was carried out by carrying out point measurements at regular intervals (5 mm) across a 90 mm length section of the panel. The line scan was performed again along the same section but in the reverse direction. The layer thicknesses measured reveal the expected linear increase in the thickness of the basecoat over a broad thickness range (±33% of center thickness). 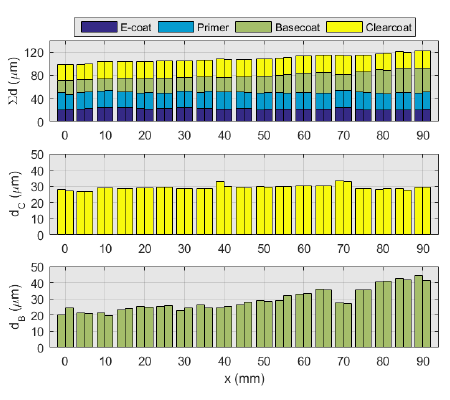 Prototype sensor trials were carried out at a manufacturing site situated in the UK. Thickness readings agreed well with the values of standard techniques (EM and ultrasound gauges) for various paint systems composed of a range of substrates and basecoats. 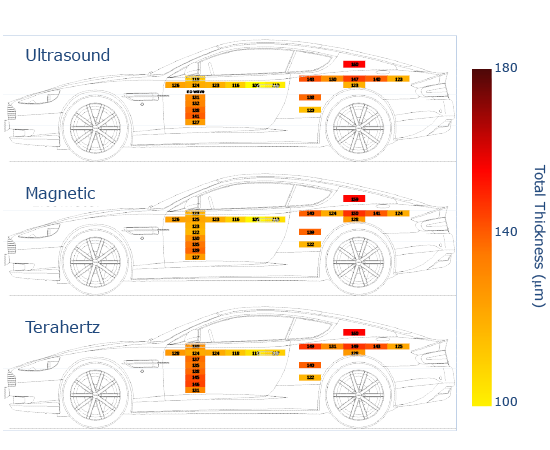